The social activist division of the Manosphere has recently been shining a bright light on the dark and ugly place that is radical feminism. All ideologies have radicals, that much is a given. These radicals are different. The recent news stories posted on A Voice For Men show that radical feminism is not only still around, it’s exceedingly violent and worse, radical feminists are in positions of influence and respectability. 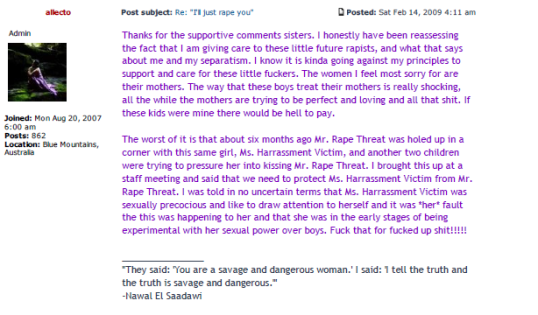 I’m not going to cover the whole story in detail because Paul Elam and the guys on that website have done an exemplary job of exposing the very disturbing women who are posting and commenting on at least one radical feminist blog/website. Many of these women openly advocate for the genocide of men. They wish violence and death upon men. Their hatred of men is deep and intense.

Indeed, there is even a renewed interest in the SCUM Manifesto. That vitriolic document – written over 40 years ago – advocates for the “elimination of men”.  There was a recent conference in Perth, Australia to actually celebrate that diseased document and it’s equally diseased author (now deceased). The SCUM Conference was attended by academics and sundry writers and bloggers. Paul Elam has a list of participants in another great article on A Voice For Men, here.

What’s so shocking to is that such violent ideologues work amongst us as educators, academics, lawyers, and community organizers. Some of these women have influence over public policy. Imagine a hardened white supremacist helping draft legislation.

I will certainly concede that some elements of the Manosphere are dark and with righteous anger. I have yet to hear anyone from the Manosphere call for the outright elimination of women.

The reason I am raising this issue on a dating and relationship blog is because the extreme anti-male attitudes of radical feminism casts a pall on the general relationships between men and women. It’s because of this extreme ideology that women can so casually dismiss or disrespect all men and no one raises an eyebrow. The misandry started by the radical feminists percolated up through politicized feminism and into our mainstream culture. Misandry is now so accepted that it’s like nitrogen in the air.

When Sharon Osborne – on a daytime TV talkshow – laughed and joked about a man’s penis being cut off his angry ex-wife, the celebrity wife was echoing the ugliest of radical feminism’s hatred of men. The female audience laughed along with Ms Osborne. Watch the video for yourselves. The general laughter at the extreme misfortune of a man has the definite brand of radical feminism.

I really do want men and women to connect and have solid, long-lasting , and intimate relationships. I also want men to achieve their relationship goals. But with such hatred so accepted, it makes getting women and men together a far more difficult process.