Reality TV Knocks On My Door – A True Story

Almost a month ago I received this missive in my email in-box account:

My name is [name redacted]; I am the Casting Director in series development at [redacted] Films in New York City [URL to the production company]. You may recognize us from our most popular series, “[Redacted]” on [redacted] and “[redacted]” on the [redacted] Network.

We are currently casting a series about dating and matchmaking for a male skewed network; and are looking for the perfect matchmaker [she later indicated that it was more about date coaching]. We are looking for someone that can communicate effectively with both men and women. Someone who is down to earth, that people would not mind letting into their lives.

The majority of matchmakers on television are hostile and aggressive, we are not after that style. We do not mind a little bit of tough love for very difficult clients; however, we are not aiming high on the “sassy meter.” We need someone that can help men and women with everything from presentation (dress, what your apartment looks like) to personality.

I saw a few articles about you and came across your website. I am very interested in learning more and would love to see if you would be available to have a 15 minute Skype casting interview with me at some point later this week?

Please let me know if you are interested and when you are available.

Thank you so much for your time.

Immediately suspicious, I did my research. I found the casting director’s LinkedIn account. Yup, legit. I looked into the production company. Again, legit. This appeared to be no clever Nigerian scam.

We exchanged a few emails where I agreed to do the audition she complimented “my style”. I clearly told her that I was firmly middle age. She still wanted the audition. I also inquired about how she found my blog(s). Her response was a delightfully opaque one word answer: “Google”. Good one, casting director, good one.

So, with Skype installed on my laptop, I booked a conference room at work for privacy and did the audition on June 7, right after lunch. She explained that she would be asking about me and what I do and gave me one piece of advice: “be sure to speak in full sentences”. That’s good advice. I warned her that I would have my own questions at the end of the audition. She agreed laughingly. It was a good start.

The audition lasted just a few minutes. I think I did well. As I’ve had experience in radio and live comedy shows, my presentation was smooth with few vocalized interruptions (link below). As things were concluding, I did ask about the show and where it was in the development process. Due to obvious confidentiality agreements, she couldn’t say much. But she did mention that the show couldn’t progress until they found a host for the show.

“This is what this audition was for?”

I had just been auditioning to be the host.

She told me that I would hear from her a week after the following week. So ended the audition. Within hours I sent a thank you email.

It’s been three weeks since I auditioned and I’ve not heard back. I’ve also learned that at least one other dating advisor has done the audition. Likely, others have, as well. But outside of the Pickup artistry (PUA) guys selling “systems”, I’m one of the few dating advisers who actually specializes in helping men.

This request for an audition points to the fact that there is interest in cable TV land for a show that could possibly deal with actually improving men so that they can meet their relationship goals. Or, it’s just a terrible goof on dating advisers. We’re talking “reality” TV here. Would you watch such a program where a man helps other men be more attractive to women without all of the PUA element?

Posted in About Me

The Parable of Mark and Lauren (by laidnyc)

I’m a huge fan of cleverly written blog posts. With the author’s permission, I’m reposting an extraordinarily clever post from LaidNYC (link below). A smart reader will quickly figure out angle of this post and the lesson it imparts on young women. Honestly, there are times when I’m grateful to be middle age and don’t have to deal directly with the 20-something dating scene.

Lauren is happy.  Last night, her boyfriend Mark finally told her he loved her.  She had been wanting that ever since they started seeing each other four months ago.  She had been having sex with him, and it had been pleasurable for sure, but she was doing so hoping it would turn into something more: love.

Mark had been aloof and slow to give away his emotions.  Lauren didn’t mind this, she even preferred it.  It meant that she had to work for his love, and by the time he said it, she felt she had earned it and that it really meant something to him.

Lauren set up an excited brunch with her friends Stina, Terri and Lisa.  They hadn’t seen each other in four months, in fact none of them knew she was dating Mark.  Right away, she starts telling them the good news.

“Wow” said Stina, “I didn’t even know you were dating a new guy! That’s great.”

“Mark Smith”, said Lauren.  A hush immediately fell over her support group as they began to give each other awkward looks.

“Yeah”, said Stina, “He told Jackie Valenti he loved her.”

“Okay” said Lauren, “But she probably fucked his brains out, right?  Like, he was definitely getting sex from her?”

Stina cringes.  ”No” she says, “They never even kissed.  He went over to her place drunk one night and professed his love for her.  She never even let him in her bedroom.”

“Alright but that’s only one girl.  That’s okay.” Said Lauren, getting nervous.

“Well there’s also Andrea Tedesco.  He told her he loved her after two casual dates.” said Terri, “She was bragging that she kept him around for a while, getting ‘good morning beautiful’ texts from him and other indications of love whenever she needed it, and she only stopped accepting his love when he started to want sex.  He still writes on her facebook wall.”

Lauren felt a deep pit in her stomach.

Lisa continues: “Mark told Angelica Messina he loved her the first night he met her.  She said he was REALLY into it, looking her right in the eyes when he said it, getting down on his knees in front of her just to kiss her hand, and he even recited poetry for her.  She gave him one of those awkward one arm hugs and that was it.”

He never did that freaky stuff with me, thought Lauren.  If he does that stuff, then why did I just get a plain old “I love you”?

Plus Angelica is the biggest cocktease in the city, thought Lauren.  How could Mark fall for her bullshit? What an idiot.  Now she thought Mark was stupid as well as loose with his love.

Stina says, apologetically, “I don’t want to tell you this, but I heard Mark met a girl in a club and dragged her into the bathroom to tell her she was beautiful, then he gave her twenty dollars.  She never even touched him.”

“Okay, please stop” said Lauren.  She was growing sicker by the second, her world crushed.

Later, she confronts Mark with her new knowledge.  Did he really love all those girls without getting sex from them?  She demands to know.

“Well yeah but I didn’t really WANT sex from them”, Mark lies, possibly even to himself, “I wanted to give them love, that’s all.  I wasn’t ready for sex at that point in my life.”

“No way, guys can want love without sex, too”, claims Mark.

“Well I heard you told Shirley Thompson from my building you loved her and I have to look at her every day.  Plus she’s really pretty, there’s no way she was going to fuck you! Why did you love her?” says Lauren.

“Is that what this is about”, Mark says, “You are just insecure because I have more experience with love than you.  You think you can’t measure up to all the beautiful girls I’ve loved in the past.”

“Just how many girls did you tell you loved?” asks Lauren

This hits Lauren like a brick in the stomach. “30! That is insane, you are a loser!”

“Can’t you see that my past doesn’t matter, and you are giving me sex now and that’s all that matters?” says Mark, “I love the sex we have and that’s something I didn’t get from the other girls.”

Mark can’t see why this only makes Lauren madder.  Why should she be the one who has to pay by putting her valuable eggs at risk by taking his sperm in order to get the love and attention that the other girls got so easily.

“Well if you give away love so easily, why did you make me wait?” says Lauren, “Was I not as good as the other girls?”

“Well I saw the chance for sex with you and I didn’t want to mess that up by giving away love too soon”, says Mark.

Someone so loose with their emotions is not a good person to give sex to.

What if they have a son who turns out to be easily manipulated by a pretty face, like Mark?

What if a pretty girl in need bats her eyelashes at him and he gives her money that their family needs?

What if she just wants a man’s love all to herself and that can’t happen with Mark?

Even beyond that, on a very visceral, base level that she couldn’t explain, she found Mark repulsive.  It was as if she had been wired biologically to feel disgust and lack of attraction for guys who allow themselves to get friendzoned.  There was no way she could fuck him again.

Yup, it was as clear as day, thought Lauren.  Guys who give away love easily are definitely not worthy of sex.

Posted in Rationalization Hamster, Relationships, The Collective Wisdom of Men

While out walking my ugly dog (photo below) this morning, I came across a small local event promoting the fight against cancer. Several local organizations were present. Sadly, the music was provided by a mediocre group butchering rock ‘n roll classics with very dull knives.

Of course, not all Broward County sheriff’s patrol cars are painted like this. In fact, this is the first pink one I’ve seen. I wonder if it actually goes out on patrol.

Yeah, it’s a pink patrol car. I really don’t have any commentary. So, here’s a photo of my dog licking my big, bald head. I don’t sit on the sofa much because every time I do, she jumps on the back and commences to licking. It’s weird and everyone who has witnessed this canine behavior laughs for the first few seconds and then says “that’s really weird.” 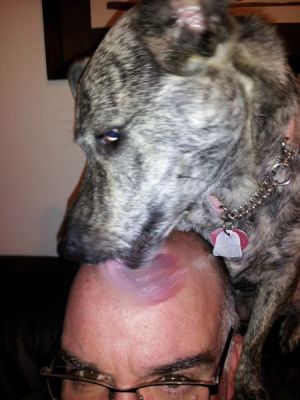 Posted in About Me, Uncategorized