I stole this from a comment over at Sofiastry. I am originally from Boston and so I got all giddy from the Bruin’s very recent Stanley Cup victory. Happily, I’m old enough to remember the last time the Bruin’s took the cup (Bobby Orr, anyone?)

The riots in Vancouver took me by surprise. Canadian riot? That’s an oxymoron.

I found this photo to be oddly comical. A Canadian. An Asian. A hipster. A nerd. He’s in full on rage mode over a hockey game. Is this a sign of the apocalypse? 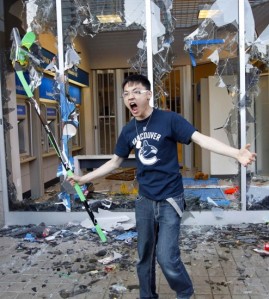